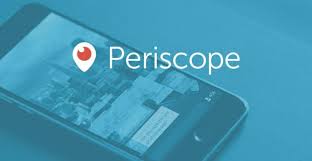 We have all come professionals with Twitter, Instagram, LinkedIn, Pinterest, Snapchat and so many other social networking platforms. Now there's Periscope which made it's debut awhile ago. Periscope is a live streaming app brought to you by Twitter itself. It allows you to create an account, follow others, broadcast live to look into the intimate raw footage of others. Celebrities are plentiful, you have a map from around the world that can pin point you to anywhere in the regions to see who's live.

You have settings to notify you when someone is broadcasting live or when someone you are following invites you to join someone that they are following. It is a powerful networking tool! You have a chat room where you can join in conversation with others or ask the broadcaster questions. The only problem that you might run in to is the broadcast being too full. You can still give them (hearts) which I call "virtual love" and listen in; the broadcaster just won't be able to see your comments. You also have the option of replaying a broadcast if it was too full or if you missed the broadcast.

The latest news is that now you can see if someone takes a screenshot of your live broadcast. It's interesting to see your viewers doing this type of activity. The Pope came to visit at the White House on September 22, 2015 and of course the live streaming on Periscope was in full effect!

For iPhone users, there is a special landscape option to display a different view of the live broadcasts. Is this the new "face time" competitor for the world or just another distraction until the next "new way" of social networking comes along?