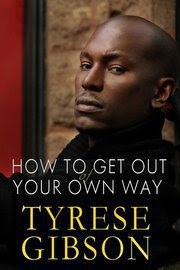 You may remember his first debut in 1995 from the Coca Cola commercial in the gray hoodie,with earphones on singing and getting on the city bus----Yes the one any only Tyrese Gibson! He's had outstanding, breakthrough roles in movies such as "Baby Boy", "Waist Deep", "Four Brothers", "Flight of the Phoenix", "Transformers", "Fast and Furious" and many more. He recently released a book entitled "How To Get Out Of Your Own Way" which is a mind blowing page turner! Tyrese is not only an actor,model, author singer, father , motivator but he is also a dynamite entrepreneur and mogul in the making. Media tried to defame him during his divorce with his ex-wife, but Tyrese some how overcame that obstacle as well.

I don't believe that Tyrese wants to be known to the media as a "sex-symbol" but a young man who is climbing the ladder of success by making it happen by staying positive and focused. Through his Twitter and Facebook audience you often see the women literally degrade themselves to become a part of "Ty's World" but in reality if you look at the content of his posts and tweets, he is far from a man to settle for less. Along with other celebrities, we often forget to look at the philanthropy side in the media that Tyrese Gibson demonstrates. Tyrese started an on-going charity organization known as The Watts Foundation. Its goal is to raise enough money to build a state of the art youth center in Gibson's hometown of Watts. Oprah Winfrey personally endorsed The Watts Foundation and has donated over $100,000 to its cause.

Tyrese branched a successful career as a male model, after attracting the interest of designer Tommy Hilfiger, who made him the face of his clothing line, one of the most successful campaigns in fashion industry history. Gibson took his brand name to the next level when he signed with GUESS and became the first and only African-American male model in history to land a multimillion dollar exclusive contract with the Marciano Brothers. Tyrese launched his own multi-media empire, HeadQuarter Entertainment, in 2005. As CEO and Founder, Tyrese oversees HQ Pictures (a film and TV production company), HQ Records (a music studio and record label), and XiT ComiX (a comic book publishing division).

Through his beautiful smile, breathtaking physique and his infamous tattoos, Tyrese never seems to amaze me. In the words of Tyrese Gibson," I'm beyond now, My thinking is always ahead... You all enjoy now.. Catch me if you can... !" Tyrese Gibson is a great example of a strong man, role model and an entrepreneur that is taking the world by storm!